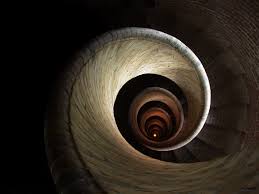 Personal and collective evolution move along a spiral. For understanding matters I’ll address it as if it was going up and down even if it is definitely not a linear spiral and up and down have no sense out of a space-time continuum.

There’s no right path. There’s only experience, but understanding it’s quantum field might help in understanding the way our experiences happen and evolve, weather in one way or in the other.

Now lets say we start from the Zero Point in between the two spirals. That is a Big Choice point where one can ponder in which direction it wants to move on. That is also a Point Humanity reached in the Big Unified Consciousness as so many choose the “upward path”.

From there on the way consciousness evolves is in a way that is encrypted in the Universal Law, which means one can choose to go “up”, “down” or move in circles, but it is not allowed (in our Universe at least) to break this Golden Rule.

From Zero Point on, once the decision of where to go has been taken, the Uni-Verse moves in order with that choice and provides the Being with the needed experiences. Once the experiences have Been Lived and understood a “jump” happens and the Consciousness moves to the next level.

Now comes the interesting part of it. The way Consciousness moves on is by following the Golden Ratio (or Divine Ratio), one of the reasons the Fibonacci numbers are so important and found everywhere in nature and in the Uni-Verse.

This being said, in order to move from one level of Consciousness to the other one One needs to… lets say add or integrate (for lack of better words) the two previous states. Consciousness does not follow a linear path as it goes not from 1 to 2 to 3 and so on. It spirals following a Divine Ratio. In the beginning of a Consciousness path lessons are mostly immediate and follow one another in a seemingly fast rate, insights follow insights and things seem to move on fast. From 0 to 1 and then again to 1 (just to make sure one’s choice is the wished one!) and from 1 to 2 and then to 3 and 5 is more often than not fast. Look at newly awakened how fast they integrate the first steps! Things become interesting when 377 and 610 need to be integrated to “jump up” to 987… For in order to make a shift there’s a need to integrate the current state with the previous one so that a “new” one can be reached.

What does all of this imply? Simply that experiences and lessons become deeper and deeper, things seem to come up over and over again and this does not happen because issues were not addressed before but simply because in order to enhance Consciousness those issues need to be taken care of in a quantum way and not only in a linear one. A spiral is an eternal movement of a wave that is lets say bent to form a so called 3 dimensional spiral pattern (it’s a bit more complicated than that but words really pose a limit in expressing these concepts). So any issue that has already been addressed in a lower state can be re-addressed in a higher state as conditions have changed. These will eventually stop when the ratio has been fulfilled in a quantum state.

Of course it can also happen that one gets “stuck” into a ratio and starts “going in circles instead of up/down”, at that point the Uni-Verse will provide all that is needed for a Being to understand the issue and move on. These are what are called “difficult and persisting situation!” -smile-

Though the “jump ratio” does not change, the perceived distance from one level to the other one seems to increase enormously as one moves on and there’s a perception of all happening at once, as if information came in from all directions! Well in a strict sense it is, as there’s no more a usual space/time environment. This is another reason why that what used to work in the previous level seems to not work at all in the new one. And also a reason why two levels need to be integrated before another “jump” can take place.

The same Law applies to the “down” spiral and it is probably now easier to understand why those that are walking on that spiral get more and more lost. They are moving the other way round but it’s laws do not change, so one that learns separation increases separation more and more until the direction is not changed.

Good news is that even though we all have our own Divine Spiral we move on, we also have lots of collective spirals and One Big Unified Consciousness Spiral and they all influence each other. So if all go “down” moving “up” becomes more difficult and not in tune, same when all start to “go up”. Those that become less in resonance with the “One Big Spiral” get more intense and profound experiences as the Uni-Verse wants to make sure they’re really willing to stay there. This also happens in both directions as for the Uni-Verse there’s no right or wrong, there’s only Energy. And if most of the Energy resonates at the same level is gets more intense to try to resonate at a different level.

All the spirals eventually reach the same point. Be it in a working group, political group, family group, soul group… Those that resonate at the same ratio get along together, those whose ratio is too far away from one another follow different paths. Until eventually all spirals will, again, merge into One. Then… well then it’s time for a complete new chapter in God’s Book 🙂

PS: there’s another, well kinda spiral… and that is One that lets say… gives overall direction… exists in every time and in all space and is ever present at once. It’s the Great Director. It’s your instinct… it’s your intuition… it’s what all long for and it’s so big it’s everywhere and so small it’s in all of US.

5 comments on “Spirals of Consciousness”

Join 70 other subscribers
Blog Stats
Archives
One – Dream
As we're all One, so it does not matter if it's you or me or whoever, it's still all part of a one fractal fragment of the One that is all. It's one sharing to learn, remember, freely share with my Self (you) part of my Self (me) to re-member the Whole during the New Terra co-creation. I dream about you and you dream about me, lets make it a nice and Loving Dream of co-Creation till full awaking.
Recent Posts
%d bloggers like this: